The days of scientists dismissing all signs of life on the Martian surface as pareidolia or just a trick of shadows may be over, as a statistically significant majority of 70 scientists agree they’ve identified evidence of life on the red planet.

According to a paper published in the Journal of Astrobiology, as well as the consortium of believing scientists, the Mars Curiosity Rover seems to have photographed evidence of life on Mars in the form of algae, lichens, and fungi.

In addition to a number of pictures showing these prokaryotes and eukaryotes seeming to thrive on the surface of Martian rocks, other photos depict what appear to be fungi growing on the rover itself.

The evidence supports a number of hypotheses that these types of “puff-balls,” or fungal organisms would be able to survive the Martian atmosphere, despite exposure to intense space radiation and harsh atmospheric conditions.

Though this information is just now being released to the public, other scientists are claiming they identified equaling compelling evidence decades ago detected by the 1976 Viking mission, yet for some reason NASA still didn’t equip subsequent missions with the proper tools to test for life. And despite the substantial photographic evidence of this life, the only way to truly prove whether it’s living is to sample it and send it back to Earth for testing. 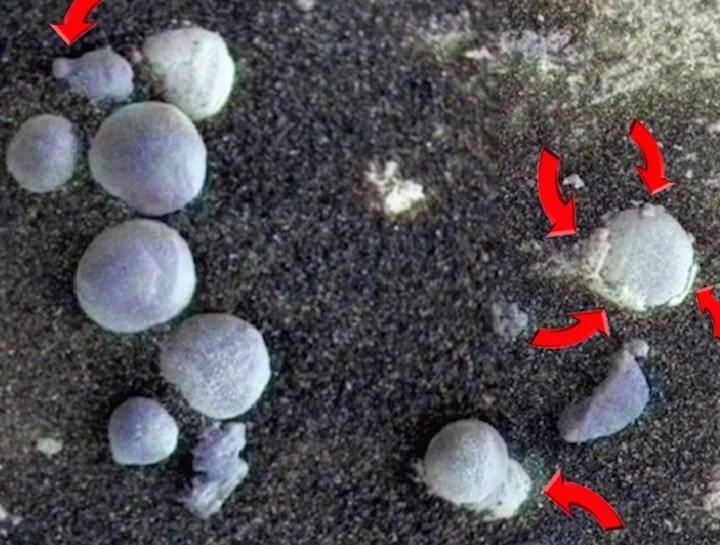 “There are no geological or other abiogenic forces on Earth which can produce sedimentary structures, by the hundreds, which have mushroom shapes, stems, stalks, and shed what looks like spores on the surrounding surface,” said the study’s lead author Dr. Regina Dass of the Department of Microbiology at India’s School of Life Sciences. “In fact, fifteen specimens were photographed by NASA growing out of the ground in just three days!”

Dass and team also argued that there are fluctuations in methane levels on the ground as well as in the Martian atmosphere that vary between seasons, much like methane fluctuations seen on Earth. 90 percent of that methane is the direct result of living organisms.

NASA denies the assertion that these photos are proof of living organisms, calling into question the validity of the journal making the claims. Instead the administration says the photos simply depict minerals like hematite.

But if this scientific consortium is correct and there are basic life forms able to survive Mars’ hostile atmosphere, how they ended up on the red planet is a bit of a mystery.

Considering that certain cyanobacteria and fungi have been observed to survive the vacuum of space and cosmic radiation, some believe these microorganisms on Mars may have come from Earth, either blasted from meteorite impacts or having caught a ride with one of the rovers.

And then there’s also the other hypothesis that says they could be remnants of an ancient civilization that once resided on Mars, before some cataclysmic event turned the planet into the inhospitable rock it is today. At least that’s what remote viewers working for the CIA claim they saw.